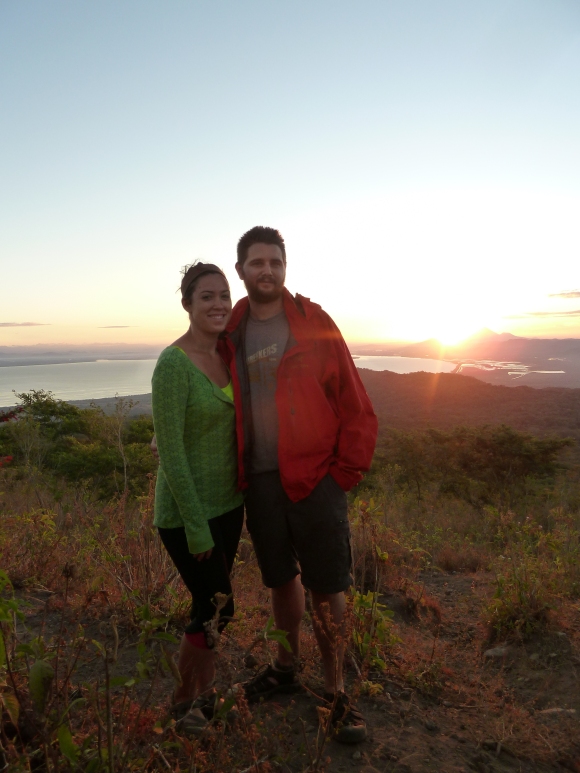 It’s 4am and we have to finish packing our bags.  Loading up our entire lives into a backpack and heading down to Quetzaltrekkers for our final hike with them.  We have a big group with us for this hike with 17 clients, 3 guides then Kristi and Myself.  Leaving at 5:30am the way to Cosiguina is long.  We took a minivan to Chinandega about 45 minutes away.  Then we took Bike taxis from the main bus terminal to a smaller bus terminal.  We went into a small restaurant there and had breakfast… kind of.  They didn’t have enough eggs to feed 22 of us, so we all settled for rice and beans with a tortilla.  Then we jumped on a 3 hour bus ride to the pacific northwest Nicaragua to Cosiguina.

The group had thirteen 20-year-old Americans from New York that all went to Elementary and High School together.  They were an awesome group.  Everyone was very optimistic and high energy and great company.  There was a couple from San Fransisco as well who were very friendly but much quieter.  Then the other two clients were the two Aussies that Kristi and I met before New Years and ended up joining us for dinner.  They are really cool, they both work together for an Aquarium in Sydney and are on vacation.  We’ve already told them they our official Sydney connection when we finally make a trip Down Under.

Cosiguina used to be the largest Volcano in Central America at a towering 4800 vertical meters.  In the 1800s it erupted and collapsed into itself which made it extinct and sits just over 800 vertical meters now.  Also because it is now dormant, the jungle has really grown into it, making it a very nice hike with plenty of shade. At the top where the crater is, is a beautiful crater lake to look in to.  Unfortunately, tour groups have not found a safe way to get into the crater to test the waters but they are still working on finding a way.

We start out the trek with a 2-3km walk down a sandy road which actually sucks because there is no good footing and though the incline is minimal, it is still very hard on the legs.  The hike itself is challenging only because you are on a steady incline the entire hike.  It’s not a difficult incline but it’s 3.5 hours of grind and no float time. Add in the mid day heat and it’s actually more challenging than it seems. When we arrived at the campsite, it was awesome.  Covered by trees and lots of bush, it was just a really cool set up.  Everyone but myself hiked up to the top to see the crater.  I needed sleep after not really sleeping for a couple days and that hike I was exhausted.  Maybe I’m not getting used to this hiking thing like I thought the day before.

The group came back down, we hung out and joked around.  This was a really fun group, I really enjoyed the enthusiasm. I had really hoped we would get to see a Scarlet Macaw but they are usually heard but rarely seen.  Sure enough as the sun was setting we could hear them squawking away.  We ate a great pasta dinner and Kristi showed me that when you shine your light in the forrest you can see little sparkles… Those are spiders.  Creepy but cool. We went to bed shortly after.

The following morning we woke up at 5:15am and hiked up to the crater to watch the sun rise.  Unfortunately San Cristobal blocks the view of the sun rise so we had to wait for it peak over top to see everything.  We ate breakfast, packed up and then it happened. One of the guides yells out, “Who shit on the shit kit?” I burst out laughing.  “We’re not mad, but whoever it was should fess up and carry it.” I continue to laugh.  “You may not have shit directly on the shit kit but you got shit directly on the shit kit”.  This has completely made my day. Of course nobody said anything and he had to carry it.

30mins in we stop to wait for the 3 people behind us.  They aren’t coming.   We wait for 15 mins then one guide ran off to see if she could find them.  They clearly went down the way we came up and we turned to take a slightly different route. So after 30-45mins of sitting around, we are back up and hiking. It’s a very basic hike, you just have to make sure you are heading down and east and you will end up at the correct destination.

It was pretty uneventful on the way down, loose gravel resulted in lots of rocks in our shoes and I rolled my ankle pretty good 40 mins from our end point but that was about all the excitement.

We arrived at the restaurant, I immediately bought a nice cold Coke.  We had an hour before lunch so we walked up the street where there was a big swimming pool like spring.  Nice warm water was still very refreshing.  Back at the restaurant, we enjoyed chicken with rice, beans and bread for lunch and the owner was raising a Scarlet Macaw back to health.  He named her Roberta and what a cool looking bird.  We skipped on the picture taking as she had a broken wing and had plucked a bunch of her feathers from obvious stress.  But I saw the bird I came to see and now nothing could ruin this trip for me.

We jumped on the chicken bus and were on our way to Jiquilillo (hee-kee-lee-oh). Everyone except 2 guides and our 2 Aussie friends.  We jumped off the bus and took the half hour walk to the Mangrove tour that drops us off at Jiquilillo.  The tour wasn’t as cool as I expected, It was huge so we weren’t close to any of the wildlife to get good views or pictures.  But we did stop at a little Island in the middle of the pacific ocean which was pretty awesome walking in the sand and hanging out for half an hour or so.

We arrived at Jiquilillo just after sunset and walked 5 minutes down the road to our destination.  That however, is going to be in my next blog which may or may not all be going up on the same day as we do not have WIFI in Jiquilillo.