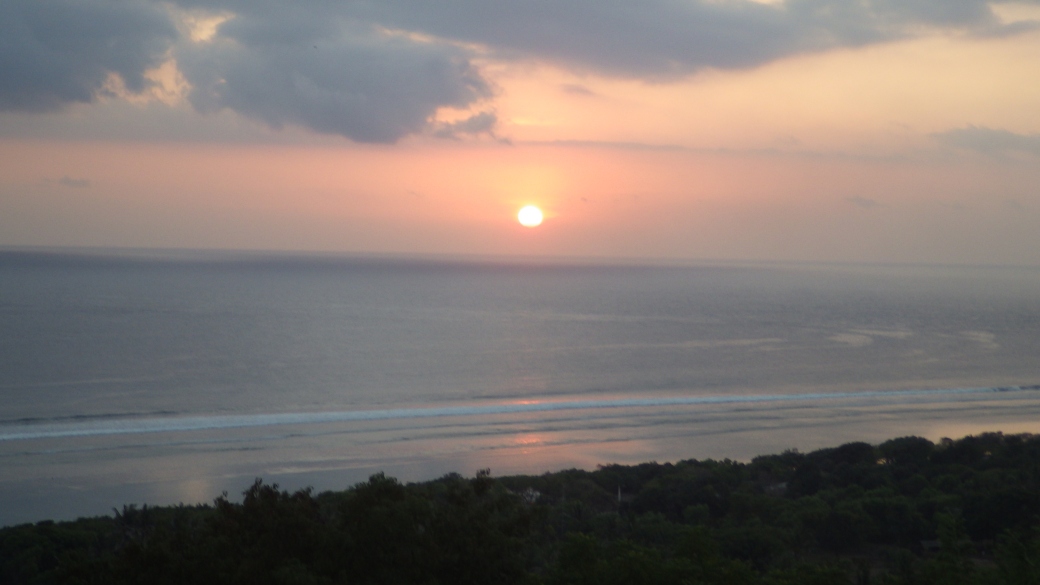 Watching the sunset on a little island far away from home.  Isn’t this everyone’s dream?

We were fortunate enough to get in contact with a guide on facebook from Ubud who arranged our boat to Gili Trawagan for 650k IR (each) with an open return.  When we were looking online, the best we could find was double that.

We went out drinking, heavily the night before because Kristi’s friend, Nick, was in town.  Right off the bat, I liked this guy.  He’s an American who spent the past year living on a dive boat in Palau and just last week, he came to Indonesia to do the same thing for a year.  He’ll be stationed out of Bima, diving near Komodo Island.  What a way to live your life.

We started out drinking on the beach but had to leave when they ran out of beer… The sun hasn’t set yet but we’re off to a good start.

We had a great dinner then went  to find a party.  We chose a random bar found space and invited some people sitting near us to join in.   The first couple to join us were an Irish couple who were newly wed and on their Honeymoon, Peter and Orla.  We hit it off right away talking everything from Soccer to UFC to just enjoying life.  They had also done some tours that we are interested in so it was good to get some positive feedback and has left me anticipating some good times.
Last to join us was a Dutch girl, and I won’t lie, I can’t remember her name.  All I remember is that she doesn’t have Facebook so we will never officially be friends.

Highlights:
Nick pretends to be Irish when Peter first says he’s Irish
Peter sees right through Nick
Nick randomly joins the live band and sings Santeria by Sublime
Kristi steps on a cigarette and over dramatically cries for 20 minutes
Nick throws up
Miles breaks a table
Miles argues with the owner that he has spent way too much money on beer to pay for the table too
Owner threatens to call the cops
Dutch girl pays off owner
Miles gives Dutch girl money (I think Peter gave her money too)
Bar last calls us
Bar decides to stay open
Bar last calls us
Bar decides to stay open
Nick passes out on our bed

Needless to say, we had fun and I made some good friends in the process. Too bad I felt like a bag of smashed assholes the next morning.

Gili Trawagan is known as a party island.  Every beach front restaurant has loud music playing and island style Indonesians (every island has the same look, no matter what race they are) standing in front saying “Yes, come in please”, “Happy hour yes”, “Big party tonight” or “smoke, good weed”.

Someone later told me Gili T is an island where you can get any drink, any drug and any disease all in one night…. needless to say, it’s backpacker heaven.

Our first hotel was badass… not the room itself but we had to walk through a small village and forest to find it.  Past cows, chickens and a lot of people looking at the whities walking through.

Kristi has a friend on the island, arrived same day as us (we planned that) who was her dive master when she got her PADI in Utila 4 years ago.  He seems to travel where we like to travel as I was able to meet him 2 years ago in San Fransisco.  He is a big French Canadian guy that goes by “G” or “Big G”.  A fun and bubbly character to be around, he is well traveled and a smart guy.  He is on Gili T with his sister (Marie-Claude), his brother-in-law (Richard), and their 13-year-old son (Raphael) who shares a huge resemblance to Mowgli from the Jungle Book.

This family has been nothing short of amazing to us.  They invited us to spend time with them at their Villa (Villa Rhuma) which was incredibly nice.  We enjoyed lunches and dinners with them, and were treated as if we were part of the family.  We learned a new card game that is way too complicated for me to explain here but once I caught on, they were all in trouble haha.

I had the flu for 2 days and they checked up on me at our hotel while Kristi and G were diving.  Kristi swears she saw an octopus, but no one else saw it.  You can decide if you want to believe her or not. I choose to believe her for my own personal happiness.

We decided we wanted to see the sunset one day and knew we were close to the sunset point.  I asked the guy where it was and he said it was too late and we wouldn’t make it… I decided not to tell Kristi this… And I pretty much made us run up the stairs to the point.  We made it just in time as we turned a 20 minute hike into less than 10 minute run.  Take a look again at that first pic and tell me it wasn’t worth it!

We left Gili T after 4 nights and headed to Gili Air.  We missed the public boat by 2 hours so we took a private boat for double the price.

Gili Air is known as a quieter Island, where you come to relax, dive, and do yoga.  The entire island is beautiful and the atmosphere is way different than Gili T.  We were able to walk around the entire island in about 90 minutes.

We met a nice girl from Alberta who was finishing up a 6 month long trip that included Fiji, Australia, 3 months working in New Zealand and now she’s here.  Kristi was planning on diving, so our new friend, Laura, joined her.  They saw Clown fish (Nemo) and lots of turtles.  One was as big as the 2 of them combined!

Interesting fact about clown fish.  The biggest is the mother, then the father is 20% smaller, then as their born they gradually get smaller and smaller and have to stay a certain size to maintain rank.  They don’t just automatically grow with age.  Hopefully you’re still with me.
When the mother dies, the father grows to the size of the mother and becomes the mother- so technically in Finding Nemo when the mother dies, Nemo’s father should become his mother… but try explaining that to a 5 year old – the oldest grows to the size of the father and the others all follow suit.  They only have a short time frame to grow to be the size they are supposed to be and if they are too big or too small, they are kicked out of the family.
As the dive instructor who explained this to us said, “It’s a tough life as a clownfish.”

Now you might still be thinking “Where the eff do I know the Gili Islands from?”  If you’re Canadian, you’ll get this.

Remember during the Olympics the Molson Canadian ad featuring the guy who was living over seas on the Gili Islands and his two friends bring him a beer fridge? Well Gili Air is that place.  We didn’t find Morgan (He’s a busy guy developing resorts here) but we did find his fridge: 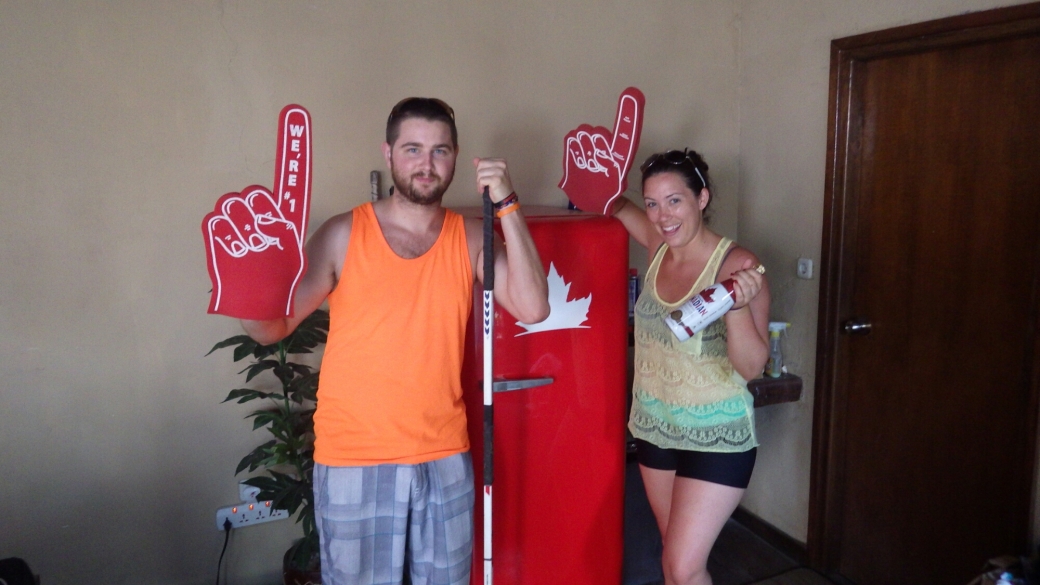 But wait.. there’s this one too

So I don’t want to crush anyone’s spirits but the fridge has no motor in it so it doesn’t work and doesn’t keep anything cold.  There’s no slot for a Canadian passport to open in and they were not able to legally bing Molson Canadian into the country so it was all empty bottles that came with it.  We also didn’t need to climb mountains or take a paddle boat to the middle of nowhere to reach it.  The ad was very well done but a little bit (a lot) embellished.

Nevertheless, it would be anti-Canadian to come all the way around the world and not seek out this fridge that was a 5 minute walk from our bungalow.

Kristi just told me she saw a Lion fish on her dive too… I don’t feel like scrolling back to insert that.  She took a bunch of pics with the GoPro Hero 2 which unfortunately takes terrible underwater pics due to the dome lens.  We’ll sort through them and put any good ones on the Facebook page.

Another great highlight:  We waited too long to have dinner and didn’t decide to start looking at menus until 8pm.  The fresh seafood that is packed on ice outside each restaurant was now just sunk in gross water… we decided that seafood would not be on our menu tonight.  We find a nice little restaurant and Kristi said she was wanting a chicken burger.  This menu had it for $3… She changed her mind while looking at the menu and ordered the ravioli.  They were out of ravioli so she went back to ordering the chicken burger.  Our fresh fruit juices came out and we some of the best we had tasted since being away (and everyone makes good fruit juices) Our hopes just rose.

Kristi’s chicken burger came out and I nearly died laughing.  Lettuce, tomato, cucumber, mayo… and what looked to be 2 slices of deep fried bologna.  There is no way that was chicken. I’m pretty sure that was the meat that hotdogs reject.  Kristi ate half of it and a slice of my pizza which also had chicken on it but it was real chicken and tasted great.  Unfortunately… the one night we don’t bring the camera so I don’t have a picture of the most disappointing chicken burger in Indonesia.  This is a lesson to why you always order local food.  They never eff up local food.

The Gili Islands have been a nice and relaxing time but we will be off to Sennggigi, Lombok in the morning to meet back up with Big G and family.  Remember when I said they have treated us like family? Well they have invited us to stay with them in a 3 bedroom house that they have rented for 4 days there that comes with a private driver from 8am-5pm daily.  This is clearly out of our budget but they said that we can pitch in anything that our budget allows us to (I can’t help but feel like what we can offer won’t be enough) as they have the place rented whether we join them or not. After seeing the pics, it was impossible to say “no”.

Now that I’m feeling better, hopefully some real adventures are just around the corner. I could get used to seeing these sunsets every day though