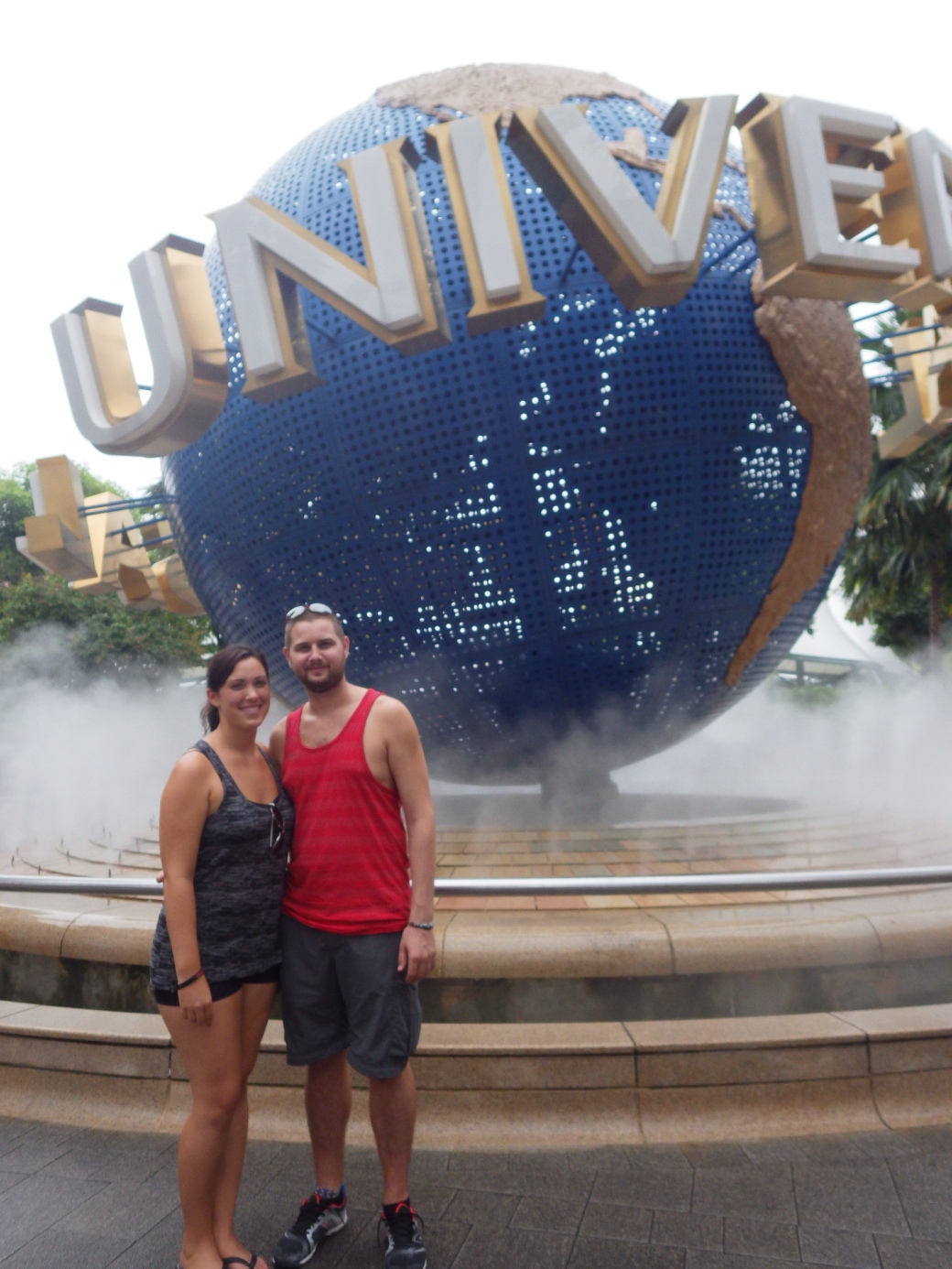 If you had spoken to Kristi or I before we left for the trip, you probably recall us stating we’re skipping Singapore.  Mainly because it’s really expensive.  How expensive? Well back in March it was rated the most expensive city in all of Southeast Asia.  It even ranked higher than Japan.
After doing some research, we learned that we could go to the city on the boarder, Johor Bahru, and do a day trip to Singapore.  This is an excellent opportunity to see the city and get out without spending too much money.  Especially since it’s like $27 (Singapore dollars) for a bed in a dorm at a hostel.

So now we have to leave our current city of Jerantut and get to Johor Bahru.  This is easy enough, a quick Google search tells us that we can catch a train 9 hours overnight to JB.  Perfect.  We go to the train station and it’s closed.  No big deal, we aren’t in any rush.  Go back the next day and it’s closed again.  When is this place supposed to be open?

Third time is a charm though, right? We get to the station and they’re open.  Yes! We ask to book and the girl asks “When?”  We want tonight and she tells us “Full”.  “Tomorrow?”  “Next day August 12″…. it’s July 27th…  We may not be in a rush but I’m not spending another 2 weeks in this town that has literally 1 attraction and 90% of locals we spoke to didn’t know what we were talking about.  Sure our hotel is cheap and food is great and inexpensive and if we stay here we have some hope to get back on budget but Kristi may go stir crazy and start hitting me.

Of course our timing could not be worse.  It’s Monday and the first day of Hari Raya which is the holiday that Muslims celebrate at the end of Ramadan.  Also the kids are officially on school break this week.  This will be fun.

So we figure out the bus.  There’s no direct line from Jerantut to JB so we take a local bus to the next city south, Temerloh.  There is a much bigger bus station here so we try to catch on to JB from here.  Full. Full. Full. Everything booked up until tomorrow night where we can catch a 9:30pm bus.  One of the guys suggests we go to KL first as there are a lot of busses from there.  There’s also a bus leaving in 20 minutes.  We’ll take it.  We arrive in KL only to find that we are at the wrong bus station and to get to the station that has busses going to JB we have to jump on the Rapid KL train.  15 minutes later we are there.  We book a ticket for  bus leaving in 30 minutes.  We haven’t had anything to eat other than chips and nips (chocolate covered peanuts. Get your mind out of the gutter) We go upstairs to the Fuel Shack and inhale a burger and a slice of pizza.

When we arrived at our hotel in Johor Bahru, it was 9:30pm.  We had left at 10am, Taken 3 busses, a skytrain and a taxi.  We also paid 4x what we would have to take the train.  But we made it.  Holiday and all.

We figured out our trip to Singapore and to our luck, we were messaged by a couch surfer living there that he could host us for a night.  Perfect.  We save on accommodation and we get to meet someone new.

We jumped on a bus and were headed to Singapore.  As we went through the Singapore boarder, we were greeted by the friendliest crossing guards.  Being used to mostly crossing the American boarder where they never crack a smile, this was quite refreshing.

We found out once we got through that the bus doesn’t wait for you.  I had wondered why people seemed to be in a massive rush getting to customs.  Now we have to wait for the next bus (they run every hour)

Our first day was basically us asking anyone and everyone how to get to the address we were looking for.  Turns out this guy doesn’t live in what people see as “normal Singapore.” Singapore is your typical big city that is built into various malls and high rises.  People here like their apartments clean, sealed and air conditioned.  Instead our host lives on the outskirts of the city in an old colonial house that was built by the British pre-dating WWll. This place is amazing as it overlooks thick jungle.  Real jungle.  He has a dog, Zora, who he says sometimes runs into the jungle and it’s so thick, he has to go in to help Zora get out.  The house is owned by the goverment and cannot be bought.  However, if anything goes wrong in the house, they don’t play landlord.  You are required to do all the maintenance yourself.

Our host is really cool too.  A middle aged Turkish guy who has lived in Singapore for 14 years.  He works in IT dealing with Casinos… everything from the ground up.  I know immediately that we will get along.  He tells us that if we have anything to upload or backup to do it there because his internet is unreal.  Kristi loaded us up with tv shows to enjoy.

The following morning we woke up and headed to Universal Studios.  Good times running around acting like kids again.  The best ride is by far the Transformers ride.  We did get rained on but it wasn’t bad and it tempted a lot of people to leave.   We enjoyed rides and shows doing almost everything that was available to us.  The park is quite small so we were able to walk around it 6-7 times in the time we were there.  The last show that we caught was Donkey live.  An interactive show where they made fart noises and picked me out of the crowd to blame.  Then I was made an honorary orge.  Sure they big the big white guy with the shaved head.  This really won’t help my nickname “Stinky” given to me by Kristi’s family.  Now I’m going to be stinky Ogre.

We found our way into goofing around in the stores.  I won all kinds of awards like World’s Greatest Brother:

We shared a $45 meal consisting of fajitas and onion rings (did I mention Singapore is effing expensive?)  and caught a taxi back.  There is a nice pathway near our house that is lit up at night and I thought it would be a nice way to end our night.  Our taxi driver dropped us off a kilometer away from that path.  then the path is another 750m to the house.  This was much less enjoyable than we anticipated.  However, as I reflect, it was a very nice walk and I hope to do it again some day… preferably when I haven’t spent the past 9 hours walking.

In the morning, our host made us breakfast:  Scrambled eggs, fresh bread, bacon and cheese.  We are too spoiled.  He had another surfer stay with him last night too who was a very sweet Austrian girl.  We all bonded and chatted before departing.  Our biggest regret is not taking pictures of the house.  Conversation flowed so easily that we forgot.

Singapore cost us a lot of money.  Street food dishes are over $10 per plate.  We’re lucky to have saved on accommodation or we might be on our way home much sooner than we want. I am very happy we went and hopefully in the future we will get an opportunity to go back and do some actual sightseeing.  It’s hard to have a bad time at Universal Studios though.

Thanks again for reading the positive feedback I’ve been getting is great. Also a thank you to those who have sent me links and have made suggestions on what to do or see.  It’s awesome to have so much support.