We really haven’t been that busy.  So here is a compiled highlight reel of our last 2 weeks.

No highlights.  This town gave off a similar vibe to Patong Beach.  We spent one night here.  I had all-you-can-eat pizza for 200B and I managed to eat 28 slices of pizza.  The pizza wasn’t that good but I was determined to get my monies worth.  I felt like a fat slob afterwards. 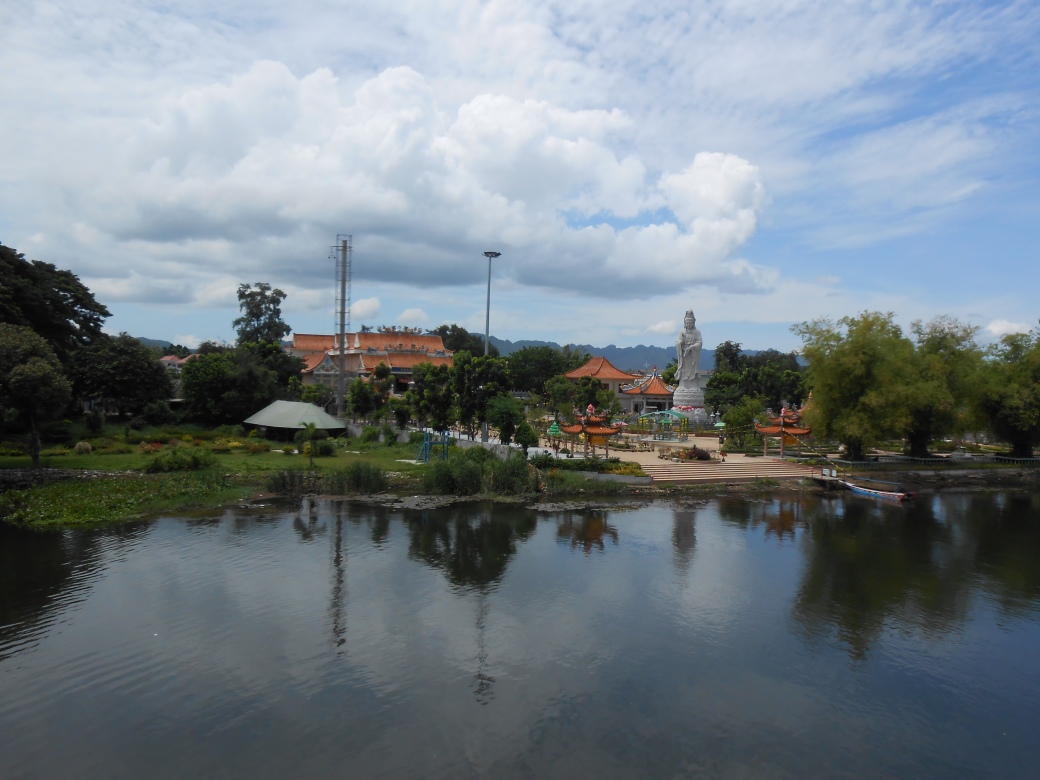 A very cool city with a lot of history.  Kanchanburi used to be a Japanese POW camp during WWll where the Japanese forced them to build a railway from here to Burma (500ish km). You can go to the river Kwae Bridge and walk along it or you can take a touristy train that takes you to the end and back for 20B.  But when you walk on it, you can see dents in the bridge from where it was hit with bullets.  Super cool.  Because it’s so touristy, there are a bunch of crafts stands set up like a small market with a lot of reasonably priced things.

In the area, they also have the JEATH War Museum (Japanese, English, Australian, Thai, Holland).  It’s only 40B to enter and almost a complete waste of time.  The displays look like they haven’t been cleaned or maintained since WWll.  When there is an English translation, it’s handwritten in poor penmanship in very broken English almost to the point where it’s completely illegible.  It’s unfortunate because they have some cool artifacts.

Down the street (92m according to a sign) is the Death Railway Museum.  This one is 120B to enter and well worth it.  It’s nearly brand new with clean and professionally written English on the displays.  It does an excellent job of capturing the emotion in these camps with letters from the POWs  and a well put together move clip with quotes from survivors.  At the end, they give you a complimentary coffee or tea in their cafe/gift shop.  We were able to sit in high chairs at the window overlooking the cemetery across the street. No photography allowed in the museum.

Our real highlights in Kanchanaburi were the taxis we took.  One we took a motorcycle with a sidecar… well its just a pallet with a bench on it.  We took this to the River Kwae Bridge and the bus terminal. 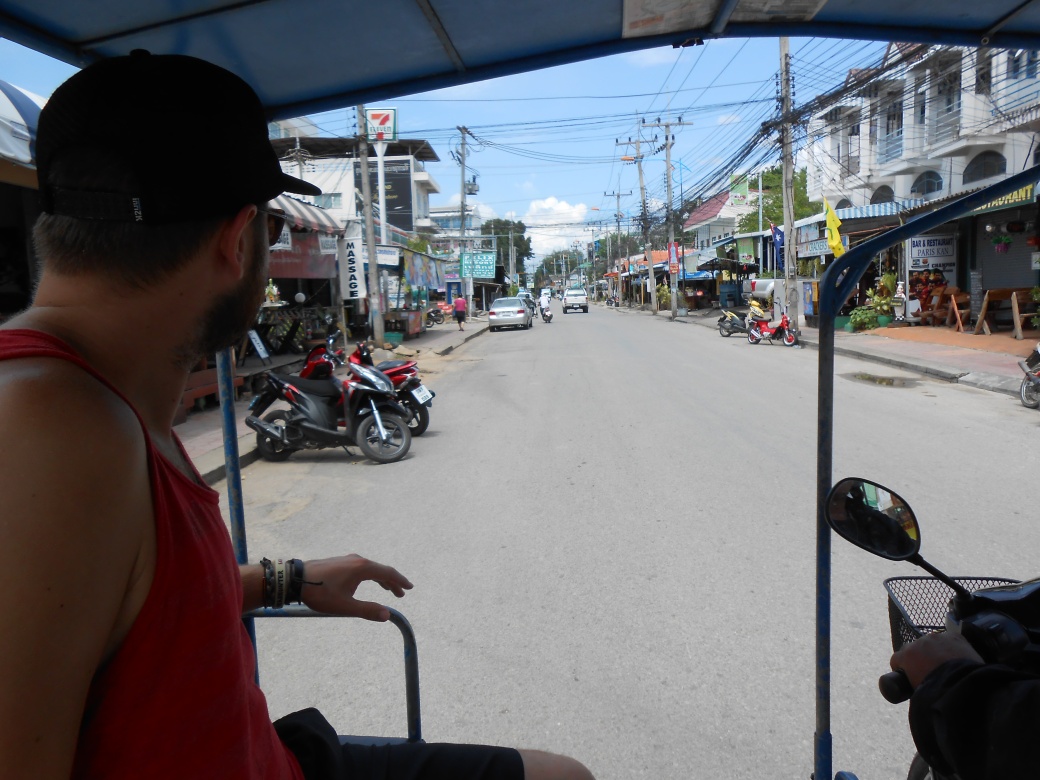 The other taxi we took was a motorcycle taxi… Just a guy on a motorcycle with Kristi and I piled on the back.  No helmets, no safety precautions and no respect for the rules of the road… we weaved in and out of traffic from the river Kwae Bridge to the cemetery spending most of our time on the wrong side of the road passing cars that were driving normally.  I can probably throw that pair of underwear out.

The night bus from Kanchanaburi to Chiang Mai:

If you buy your ticket at the bus station, it’s 594B.  The bus leaves at 7pm.  We stock up on street food from the vendors around the bus station and get ready for our 11 hour bus ride.  The bus is a double decker with seats on the top only, I believe.  We lucked out and got seats 1+2 right at the front.  Big window to watch out of, lots of leg room and nobody dropping their seat back into our lap.  Kristi used the toilet early on the bus and said it was quite nice.  I used it 8 hours in… not so nice. 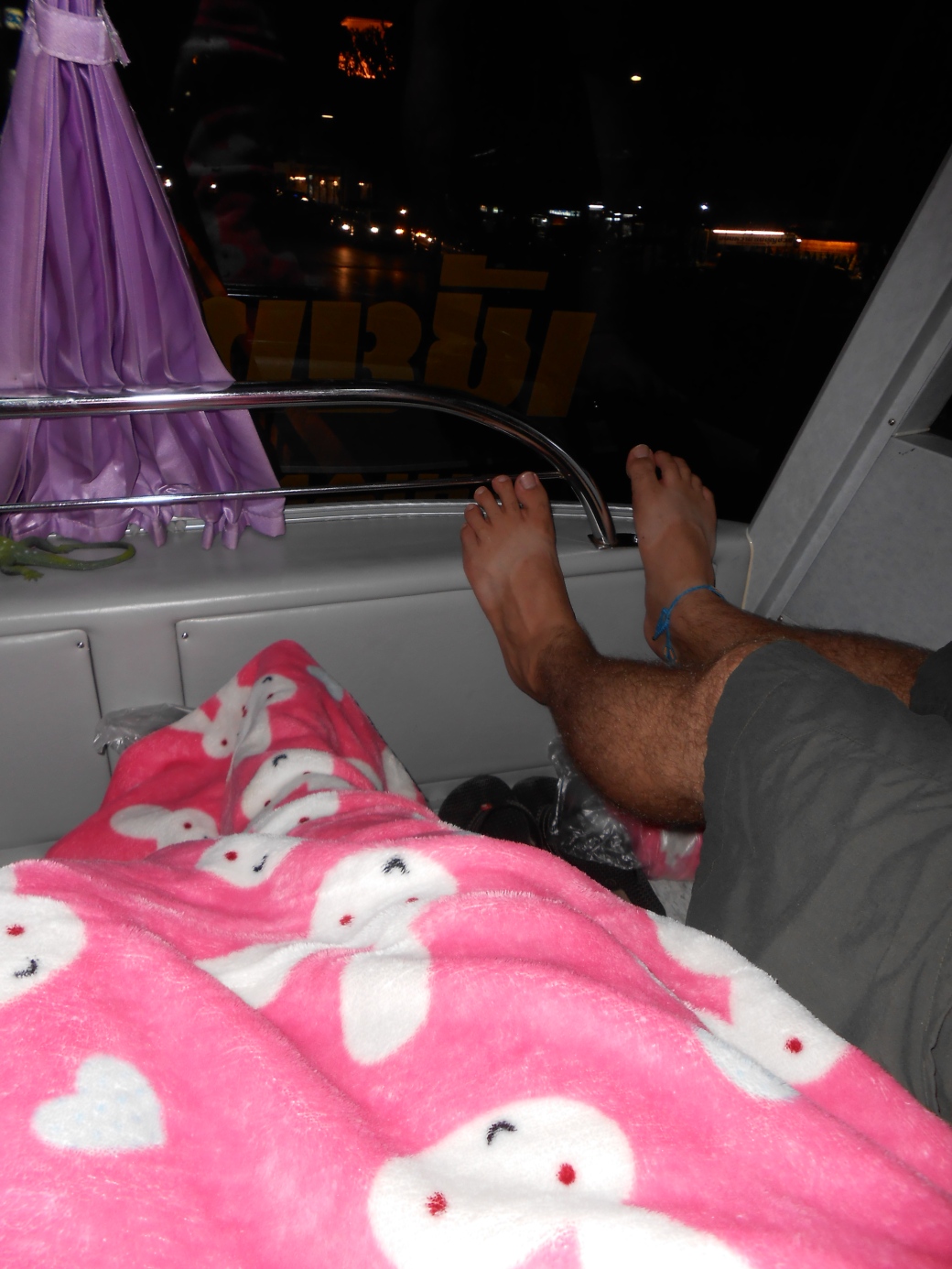 Best thing about this bus?  WiFi! The bus has freaking WiFi! It’s not great but it’s WiFi on a moving vehicle so it is great.

They start the bus ride by blasting a movie in Thai that looked like a very bad comedy with all kinds of sound effects in attempt to make their jokes funnier.  We put our headphones in and watched Need for Speed on my tablet… also a crappy movie.

Around 11:30pm we stop and are told it’s time to eat.  On our bus ticket is a detachable piece which is a food voucher.  This is the bus that keeps on giving.  There’s 6 or 7 food stands we can choose from, all with different options.  Some you can add on extra food for small amounts like 10B.  I get us a chicken and rice dish with one ticket and a veggie dish with the other.  The food isn’t great but it was included so I won’t complain.

The last 6 hours is a very uncomfortable sleep.  But I have a hard time sleeping on any kind of transportation.  There’s no outlets to charge devices so my tablet died.  Had I known there was WiFi on the bus, I would have made sure it was fully charged ahead of time.  The bus is cold and the small blanket isn’t enough so I suggest wearing a long sleeve and pants. At the end of the day, this was the best bus we have had on the trip to date.

Chiang Mai is a cool city where were ended up staying 6 or 7 nights.  The people in Chiang Mai seem to like walking and might be the fastest walkers on the planet.  Telling you things like “It’s only a 20 minute walk” which usually means for us that it’s a 10 minute walk… it took us 40 minutes.  Maybe walk and drive are interchangeable in their language… Chiang Mai has a lot of tourist attractions that we did not go see.  We spent most of our time walking around the markets and “window” shopping.  There is a big mix of Western and Thai influence here.  Just enough balance to keep the Thai roots but make it comfortable for those of us who struggle with their language.

Chiang Mai is the first place we’ve been to where random people stop us on the street to advise us on free things to do in the area and not try to sell us anything.  It’s really quite refreshing to have people help you just because they are nice people and don’t see you as someone they can get an extra buck out of.

Chiang Mai has an abundance of them.  Kristi and I took a day to visit 4 of them though I have no idea which 4.  One thing I will say to people who want to visit temples… be respectful.  It’s amazing how many people show up dressed inappropriately.  A quick Google search will tell you what’s acceptable and what isn’t.  I get that it’s hot out but you need to respect the culture.  If you’re walking by and think it’s cool and you want pictures, take note of where it is, go back to your hotel to change into something appropriate and come back.  It will still be cool and pretty in an hour or tomorrow.
One Temple we went to had a big sign with it’s Trip Advisor Rating of 4.5 stars on the door… who is down rating a holy place like a temple?  “Hmm this temple seems to lack what I desire.  They also have a sign up asking me not to spit… 2 stars”  Why is a Temple even on Trip Advisor?  It really takes away from the experience when I can rate what I think of your Buddha in 20% increments.

Anyways, the temples are all beautiful and have their own cool characteristics.  I couldn’t imagine seeing all of them but I’m glad we did go see some.

The Saturday and Sunday Markets:

The Saturday market starting at 5pm is located on the south just outside of Old City.  The street is huge and it takes a long time to see everything. Turns out this is a small market.  The Sunday night market starts at 5pm and stretches from the East gate to Samlan road which is one block off of the west gate.  After 3 hours of walking around… we still didn’t see everything.  Some of the temples open their doors on this street so the overflow of stands can be set up on their grounds.  It also seems to have a lot more hand made crafts.  If you’re in Chiang Mai, you don’t want to miss this market.

As we are always trying to eat different food, it’s rare that we eat at the same place more than twice.  Sabai Sabai Restaurant was the exception.  Tucked part way down a side street we got some amazingly flavorful food here.  I think we ate here 4 times.  It’s a small family run place where the wife does all the cooking.  Turns out, she isn’t Thai.  She was actually Miss Laos 20 years ago.  You can still see it though, 20 years later she is still very pretty.  They don’t have a website or anything just a card that they print and cut themselves.  Best Thai food we’ve had in Thailand so far.  No contest.  If you get the chance, try the penang chicken.  They don’t have a website or anything so here is a pic of their business card:

That’s it.  That’s the extent of our excitement over the past couple weeks.  We head to Chiang Rai next and we will get our visas extended.  That should be fun.  Sorry we’ve been so dull but we were starting to get burnt out after Raft houses and hiking to cave temples.  We will be back to our usual exciting selves in no time, I’m sure.