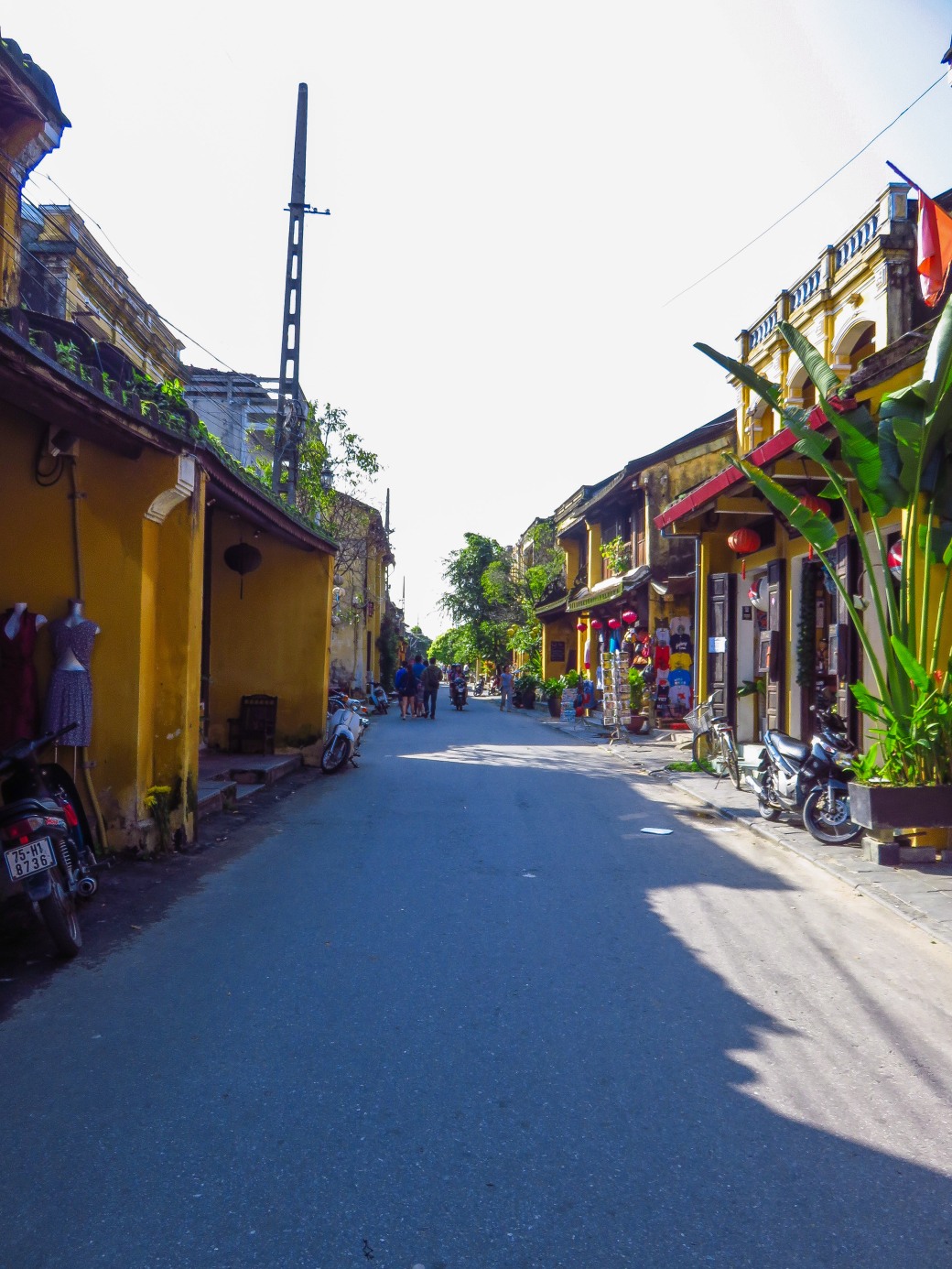 If you’ve heard of Hoi An before it’s likely because it was recommended that you get clothes made there.  All you need to do is bring in a photo of something you like and the tailors here can pretty much copy it perfectly.  The hardest part is picking a tailor that will do a good job and not cut corners on your new “designer” piece.  Best option is to use Trip Advisor and go to someone reputable.

While most people here come to get nicer clothes made such as formal dresses that they saw their favorite actress wearing on the red carpet or a nice suit made of cashmere… that wasn’t what we came here looking for.  I just wanted a collared shirt that was light, short sleeved and breathed well so I can wear it in the Southeast Asia heat and be comfortable.  Those who know me, know that I don’t wear suits at home so even though I could get a nice suit made for less than $200, it’s not something I need.  I also don’t want to carry a suit around for another 6-9 months.

Because I didn’t want a suit, I found that I was treated more like a second class citizen and a burden for most of the tailors we spoke with.  They didn’t want to put in time because I just wanted a shirt under $20.  Kristi had even more of an issue.
She just wanted a cheap travel dress with a hidden pocket big enough for a passport.  Something that she could wear traveling and not care if it got beat up and ruined. She didn’t want to spend more than $20 and had such a hassle dealing with tailors that she just said forget it and didn’t get anything made.

Part of the problem is she would show them a picture of what she liked but didn’t want it copied.  It doesn’t have to look just like that picture but it’s the style she is liking.  The tailors here don’t understand that.  They kept telling her the material she wanted would let the dress look like the photo.  There seems to be a great ability to copy something but they haven’t the slightest clue how to get creative and modify something that isn’t in the picture.  The one place that did show some creativity wanted $120 for the dress.  It was more frustrating of a process than anything.

It makes it very hard to want to buy something when you hate the people you’re dealing with.  The sellers come off as greedy and try to sell you on things you don’t want if they feel you aren’t spending enough money.  The quality of my shirt is really nice but I didn’t enjoy the experience. 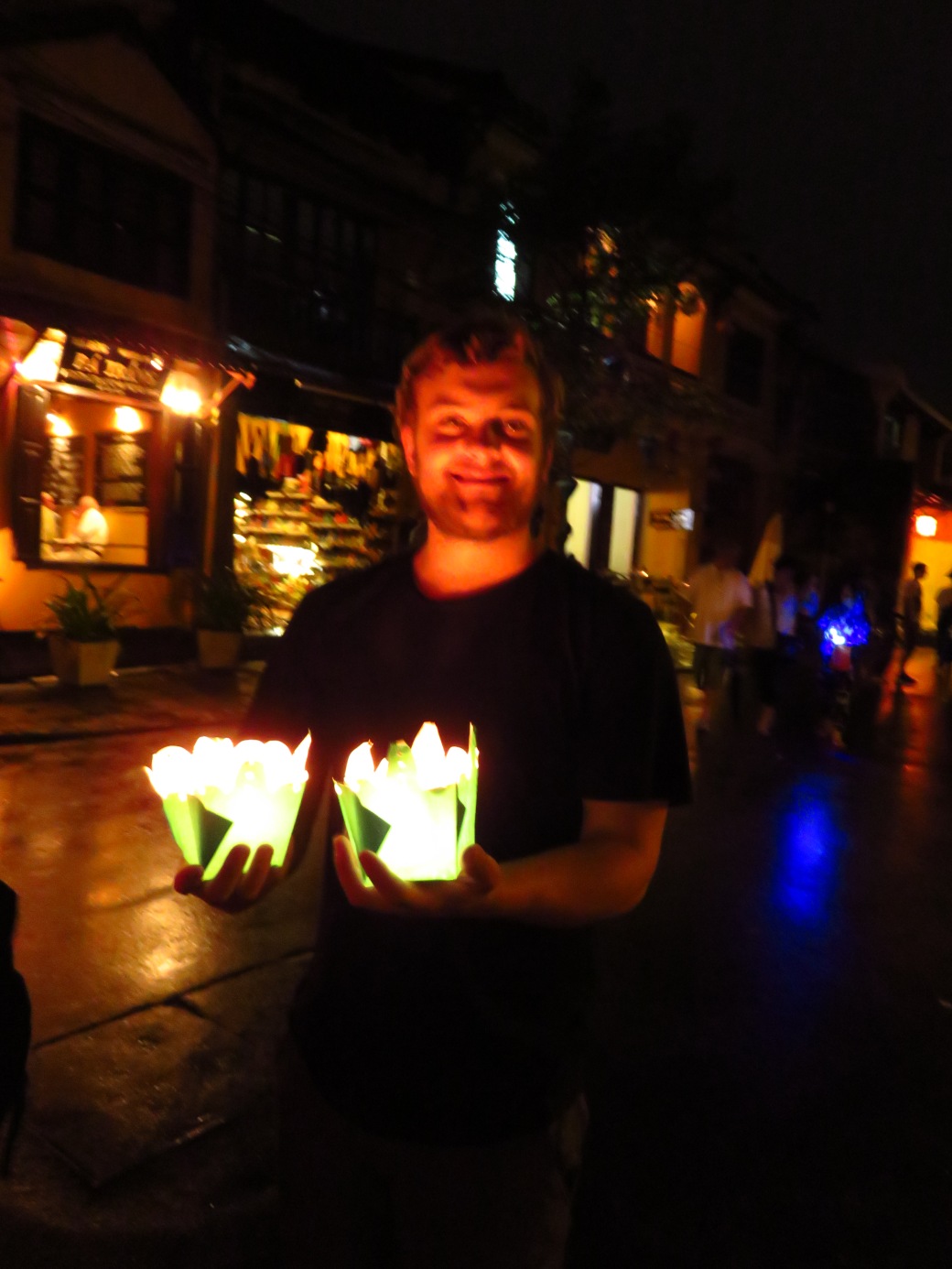 We timed our trip to Hoi An quite specifically.  December 5th was the Full Moon which brings tourists and locals together at the river where you can purchase a lantern for 10,000vnd (50ish cents) and release it into the water.  I can’t help but think how bad this is as we put a lit candle on a waxy paper raft in the water… who’s gonna clean up the garbage? They do this monthly! 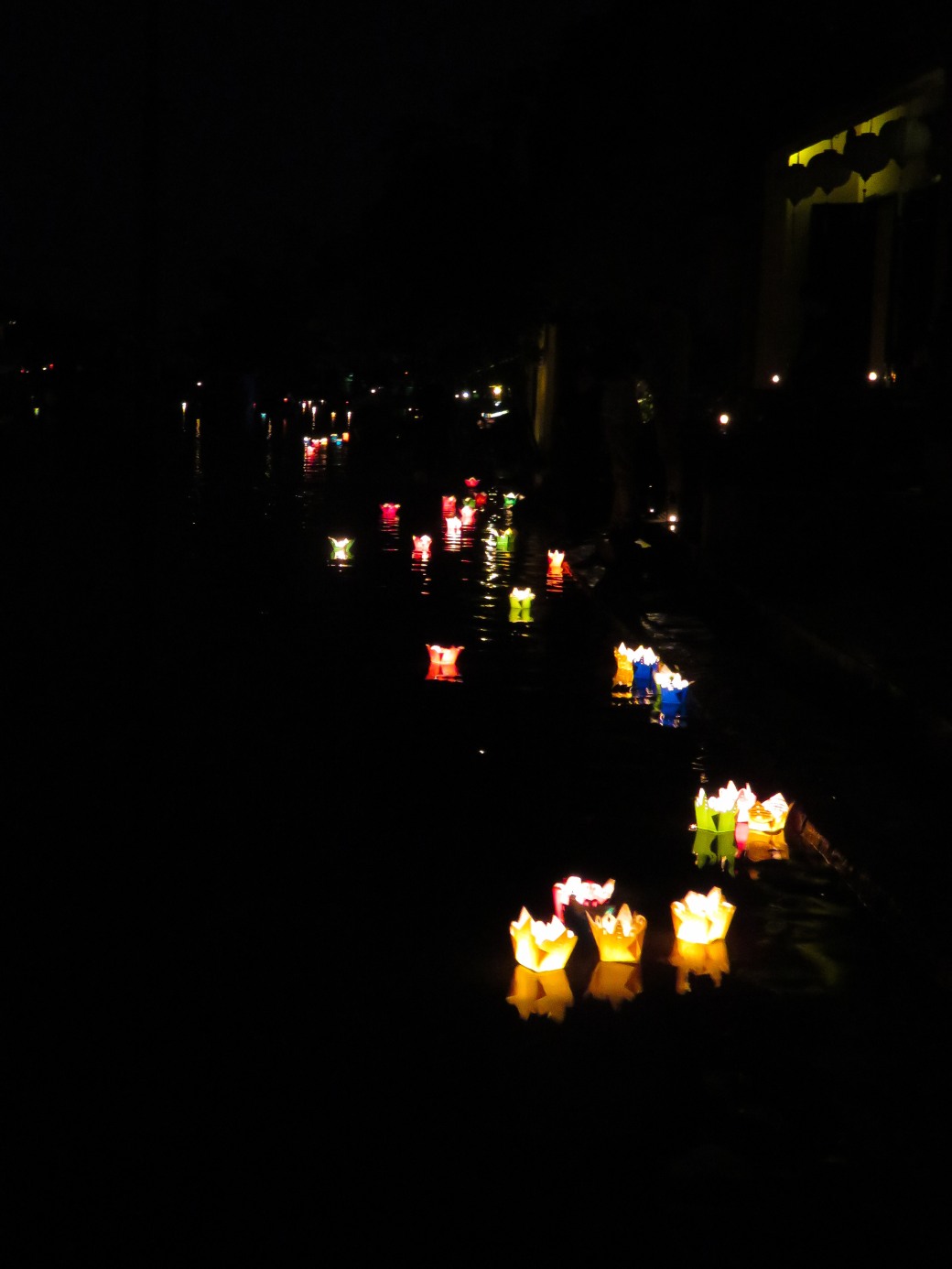 Downside to us coming here this time of year? It’s the rainy season.  My theory is “a little rain never hurt anyone” and I’m from Vancouver.  It rains 10 months a year at home.  Except when it rains here, the river floods.

We had it quite mild (apparently) because sometimes it floods knee deep through the buildings forcing employees to bring tables and valuables up to the 2nd level until the water goes away. 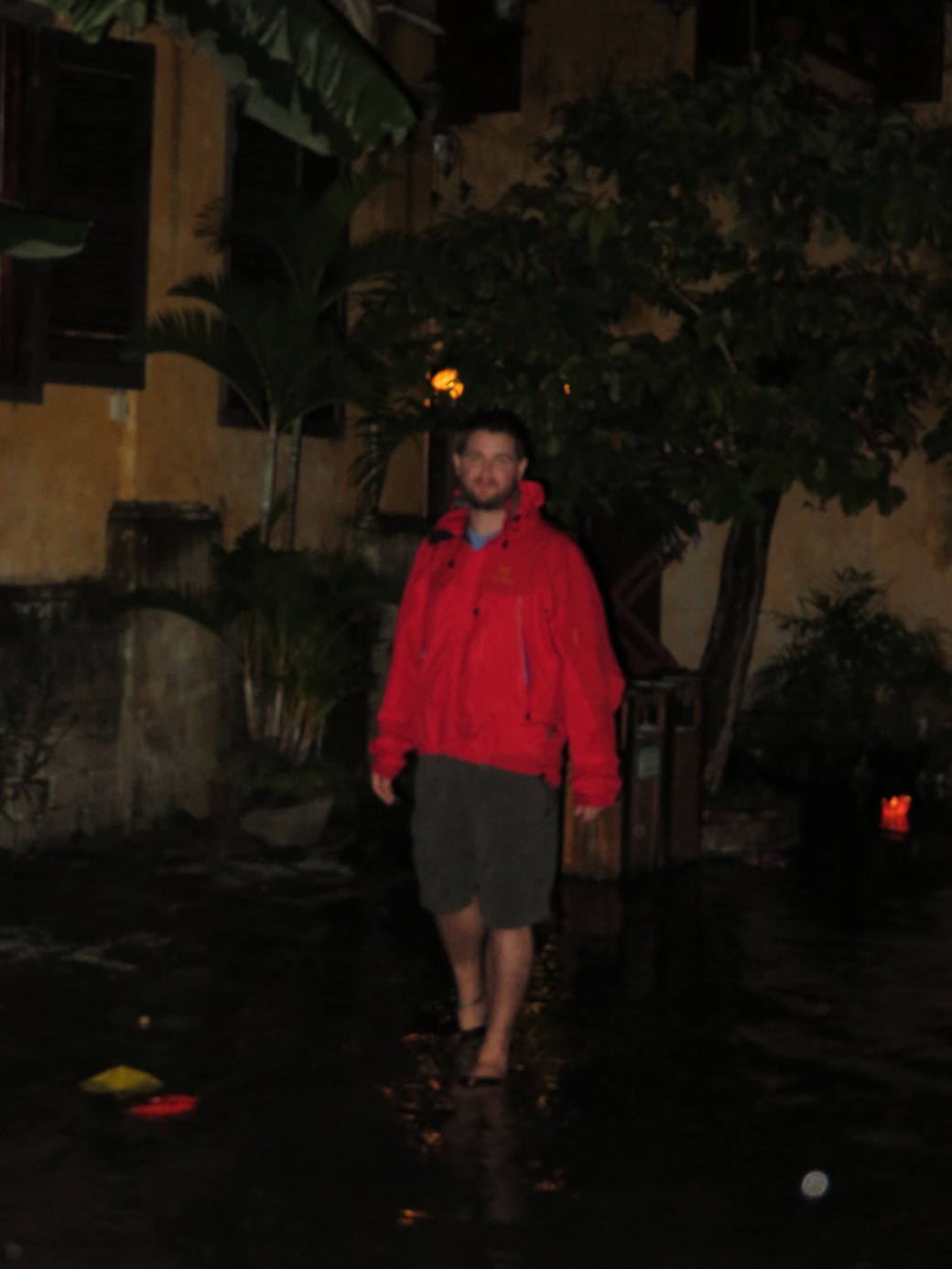 Hoi An Old City says you need to pay to enter.  Tourist price for a ticket is 120,000vnd but the ticket is good for your entire stay in Hoi An.  We never bought a ticket.  We didn’t even know we needed one until our 3rd day there and no one checked to see if we had a ticket or even tried to sell us a ticket. Just don’t make eye contact with the ticket booth and they won’t say anything to you. 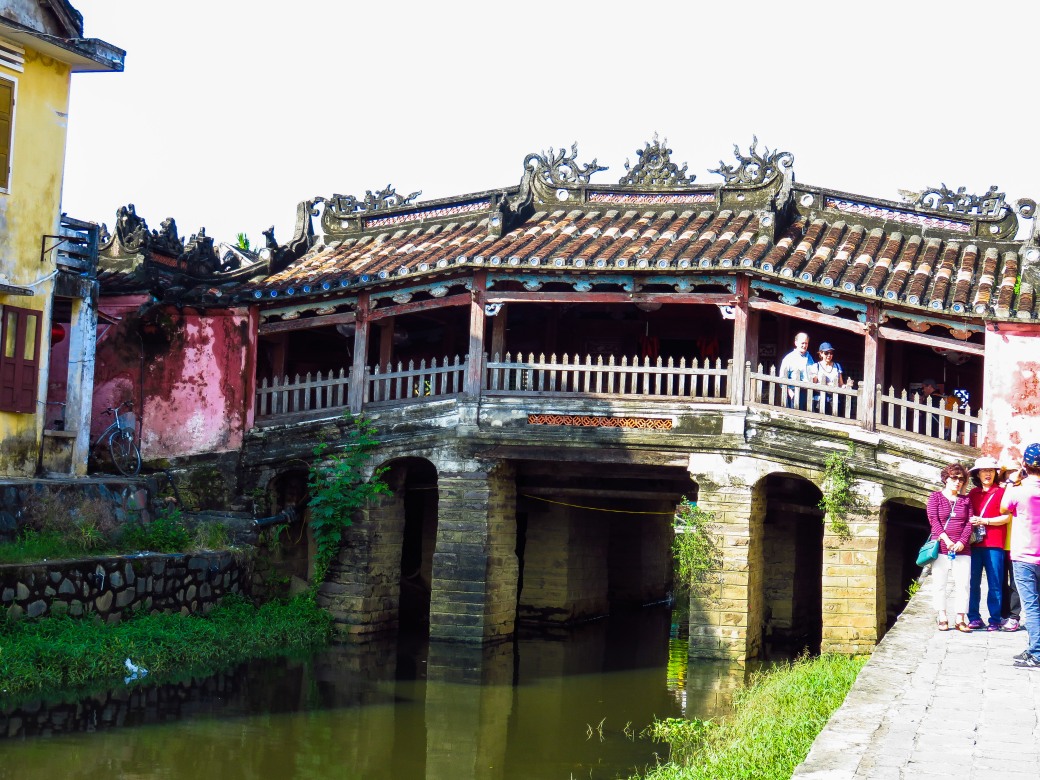 We ate lunch almost everyday at the market.  The food is decent and cheap.  It’s a great opportunity to try local food at 1/3 of the price you would pay to have it in a restaurant.  Cao Lau is 20,000vnd here.  We also returned because of this wonderful lady who ran a stall in the middle of the market. 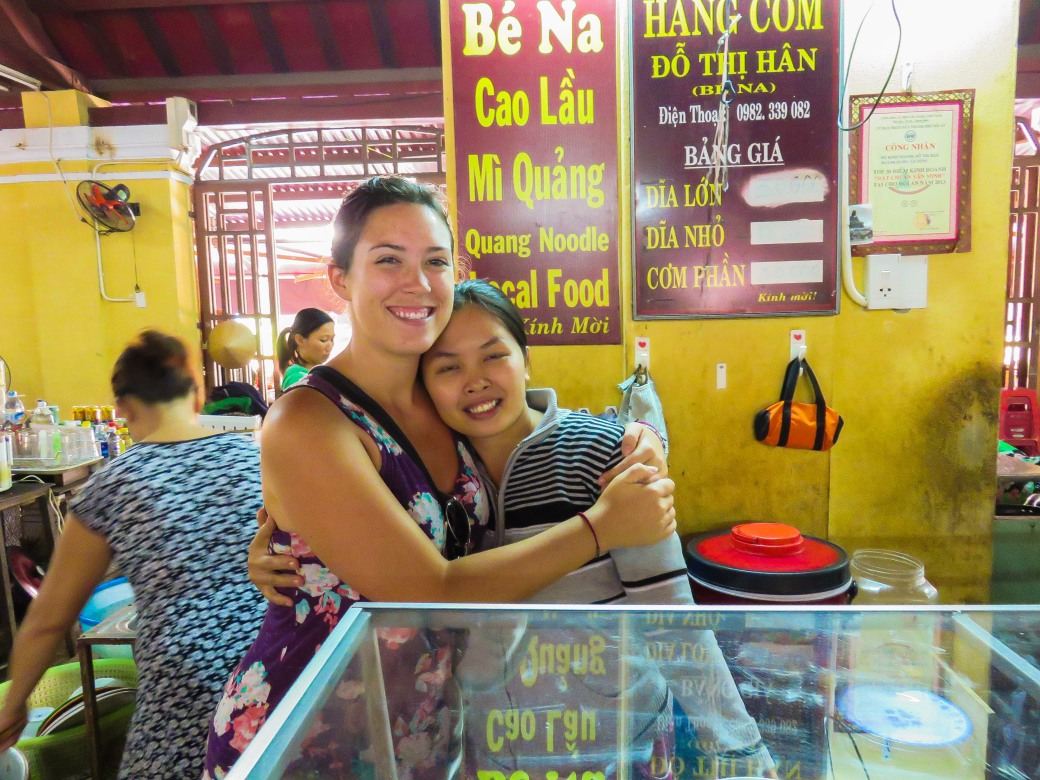 The second day we came back, she greeted us with a hug and a welcome back.  The Vietnamese haven’t mastered the art of recognizing their returning customers.  We have eaten at restaurants, left and gone for a short walk away from our hotel and 5-10 minutes later when we walk back by the same restaurant, they are trying to invite us in for dinner.  To have someone recognize us and be grateful that we’ve returned is a very good feeling.  It shows that they care and take the time to recognize you as a person and not just another dollar. 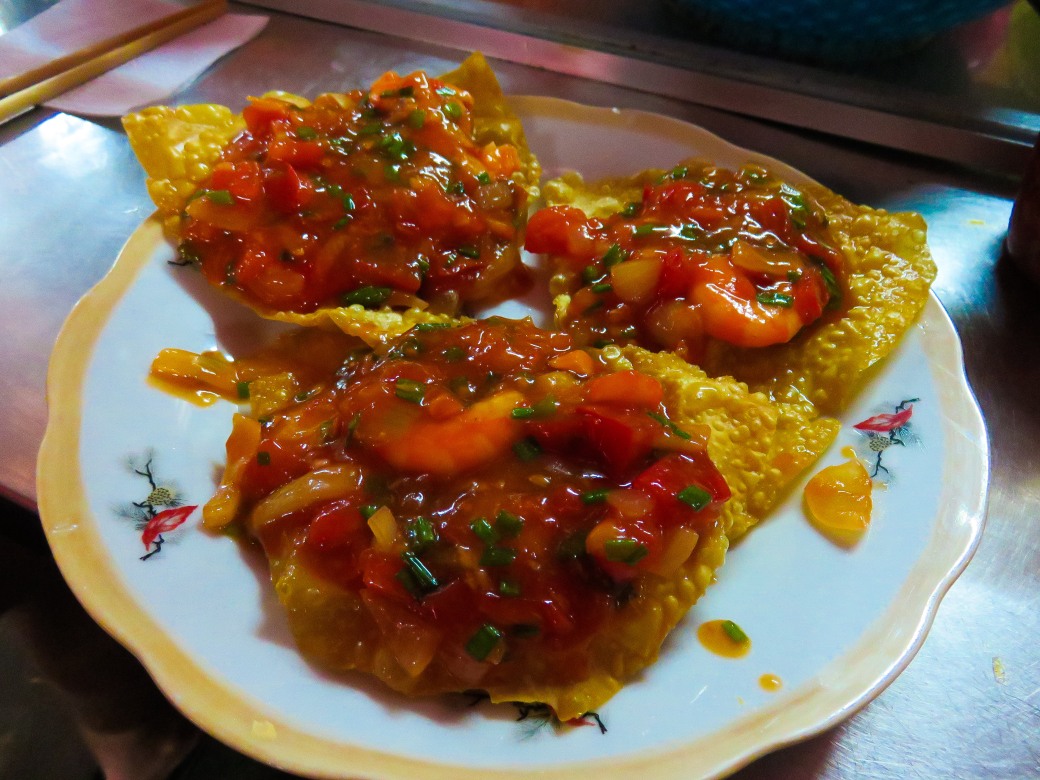 We spent a lot of time indoors while we were in Hoi An.  The rain was relentless and basically took the motivation out of us in our last 3 days there.  We did finally book a tour to go to My Son.  An ancient Hindu Temple site which is mostly ruins now due to the Americans bombing it during the war.  This sounds awful but the Vietcong were using it as a hideout which was proven when many of them were found dead after the bombings.  The tour was $4 each and we had very low expectations.  We were pleasantly surprised.  The weather held and was quite nice with only about 20 minutes of very light rain.  We also had a guide who spoke excellent English and had a great sense of humor.  Value for money this is the best tour we’ve been on.  If the weather is nice, you can take a boat back to Hoi An for an extra $2 and they feed you lunch on the boat.  We opted out just because of how unpredictable the weather was. 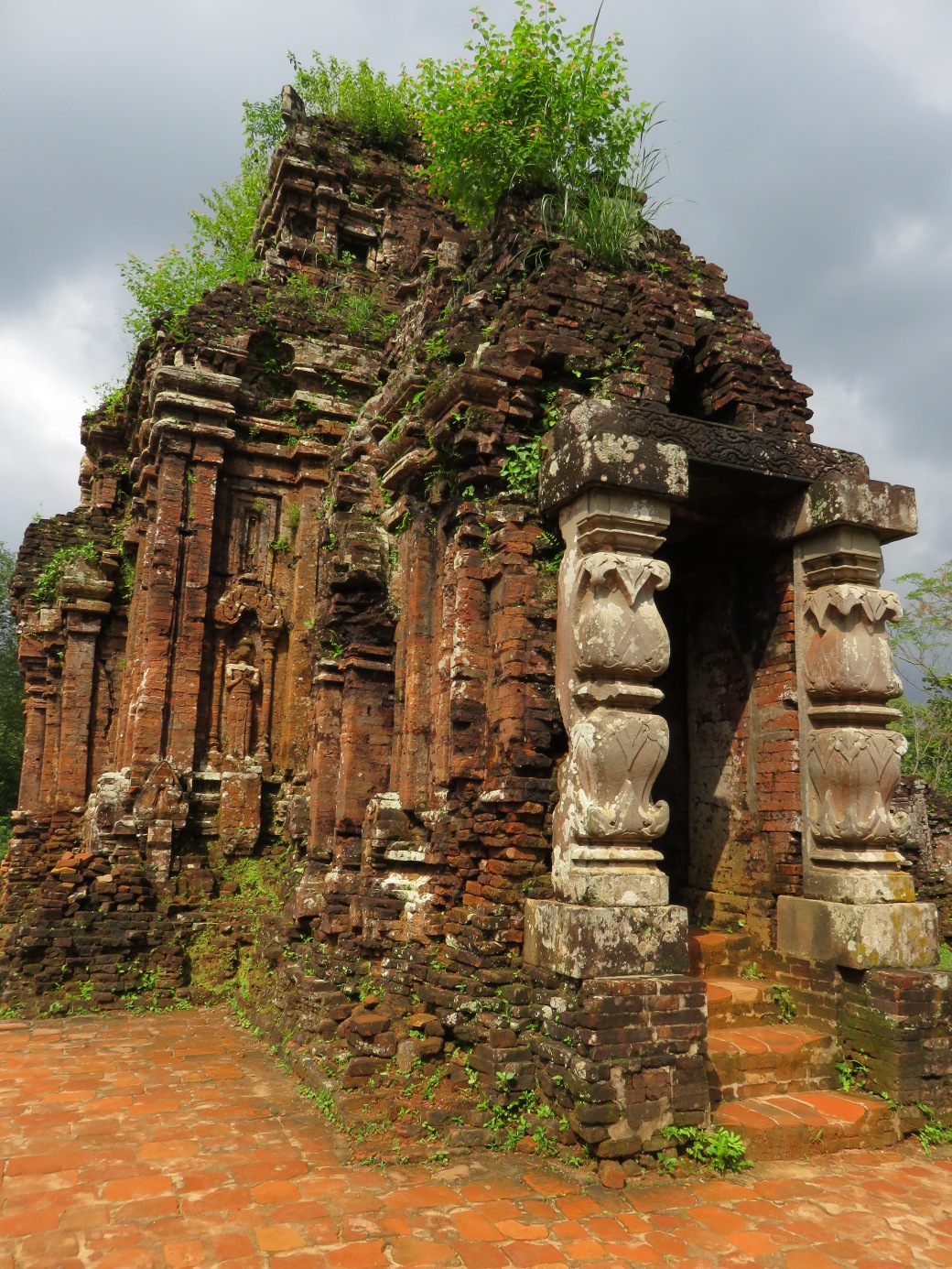 As awesome as this was, it still wasn’t the highlight of Hoi An for us.

Two years ago we met a Kiwi Couple in Nicaragua.  We got to reunite with one of them, Matt, and we got to meet his cousin, Siobhan.  Unfortunately, Matt’s girlfriend was stuck at home working while him and his cousin toured SEA for 9 weeks during their study break.  Amazing to be able to meet somewhere and coincidence that we meet in the same place 2 years later with no prior planning. Spending three days with Matt and Siobhan is one of the best highlights of my trip.  Billiards, Beer Pong, Sheesha, Copious amounts of alcohol and pure good times.  We may have to go to New Zealand to hang out again. 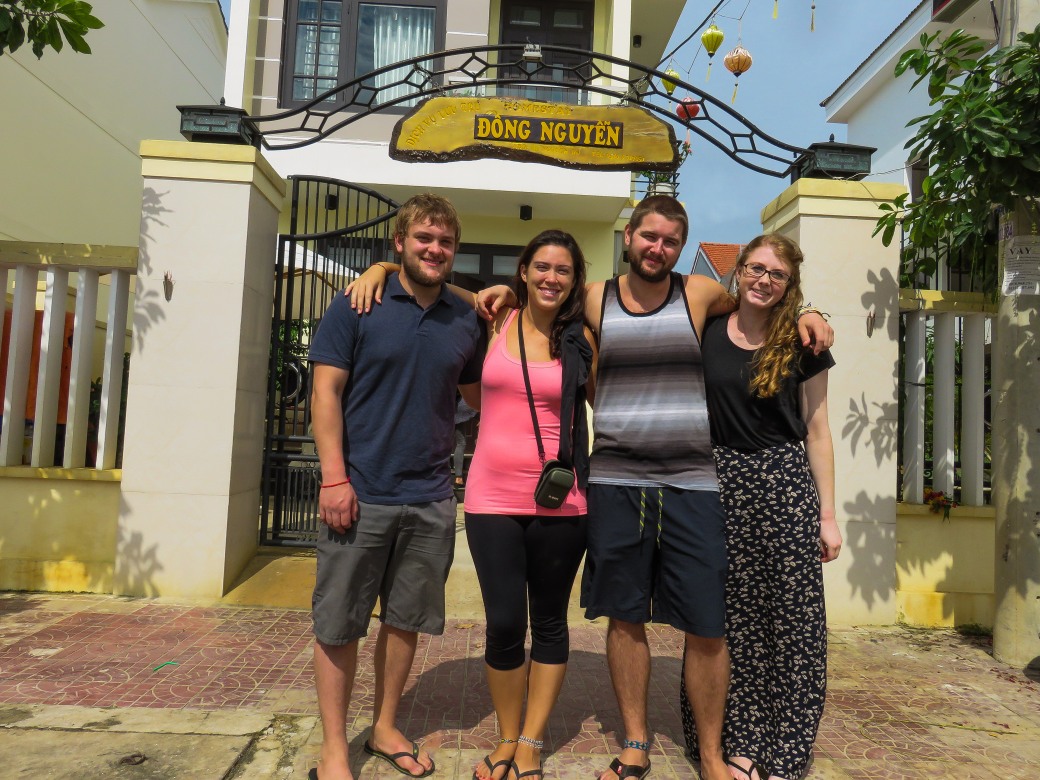 From Hoi An we are headed to Nha Trang.  You can take sleeper bus for around 210,000vnd which takes 12 hours.  We opted to take the train from Da Nang.  You can get the tourist bus for 80,000vnd+ or we took the local bus for 30,000vnd each which takes a bit longer but the guy working on the bus made sure we got off a block from the Train Station.
A soft seat on the train cost us 357,000vnd each for an 11 hour train.  Though it was more expensive, it’s nice to have the freedom on the train to get up and walk around.  Plus they have people coming through selling things all day.  We had dinner of rice, chicken and vegetables for 30,000vnd which is the same price the locals were paying.  It was nice not getting the “White Tax” as I like to call it.

Wish I had more to share about Hoi An but 4 of our 7 days were spent indoors. 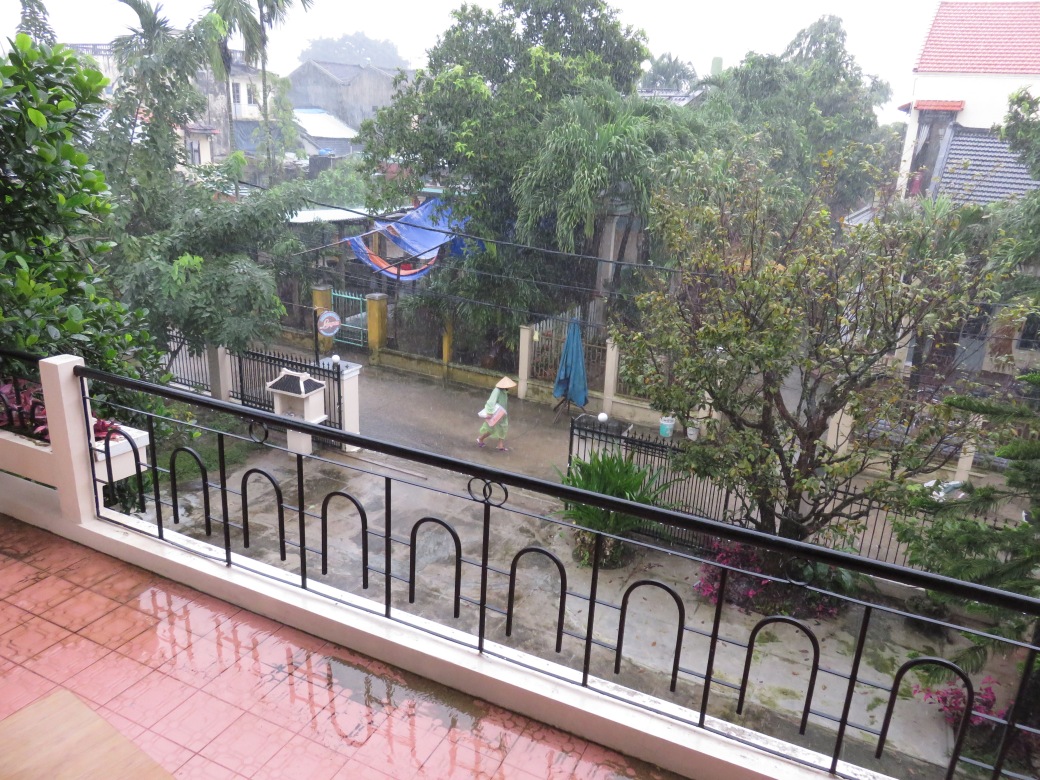