We landed in Sandakan around 9:30am so we hopped in a taxi and went straight to our hotel a couple kilometers from the Sepilok Orangutan Rehabilitation Center.  We are excited to be back as we had a really shitty camera last time we were here because our first camera filled up with water while scuba diving on Mabul Island.

We caught the shuttle over at 2pm and went straight to the Sun Bear Sanctuary.  Unfortunately one of the enclosures was really badly damaged and currently being reconstructed so we could only see the bears in the enclosure that was farther away.

Either way, for a small entrance fee of 30rm ($10ish) it goes to a great cause.  They won’t feed the bears at set times so they don’t get into a rhythm of timing.  The food it thrown into the enclosure in different areas to encourage the bears to forage.  They are actively making an attempt to rehabilitate and put these bears back into the wild where they belong.

Around 3pm we walked over to the Orangutan sanctuary as it was getting close to feeding time. Same deal where you buy a ticket for 30rm and pay 10rm to bring a camera in to take photos. 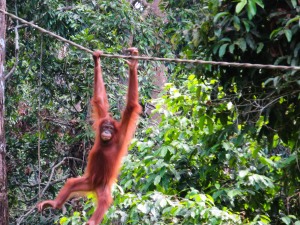 Here they have a similar approach to the rehabilitation process by arranging 2 feeding times daily.  Except instead of being in an enclosure, they’re in a massive open park.  The orangutans know they can come here for a meal twice a day but they are fed the same thing everyday because like humans, they get bored of food.  This encourages them to search for their own food and if you don’t see many at feeding time, it’s actually a good thing.

Bad thing for our picture taking opportunities, only one orangutan showed up to eat this afternoon.

We walked over to another area that was closed last time we were here and found 5 orangutans hanging out and playing on a jungle gym.

On our way out, Kristi and Cindy insisted on going back to the feeding platform while Mike and I went out to make sure the shuttle didn’t leave without us.  Lucky for them we held up the shuttle while they took a bunch of photos of a baby orangutan! 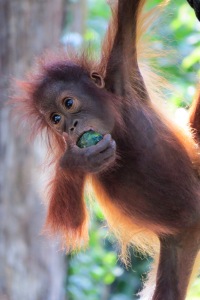 I’m really glad we were able to return here.  Another great project that is definitely worth supporting.

We spent the night playing cards and drinking beers.  Tomorrow morning we are going back to the Kinabatangan river in Sukau to see proboscis monkeys and hopefully a pigmy elephant .