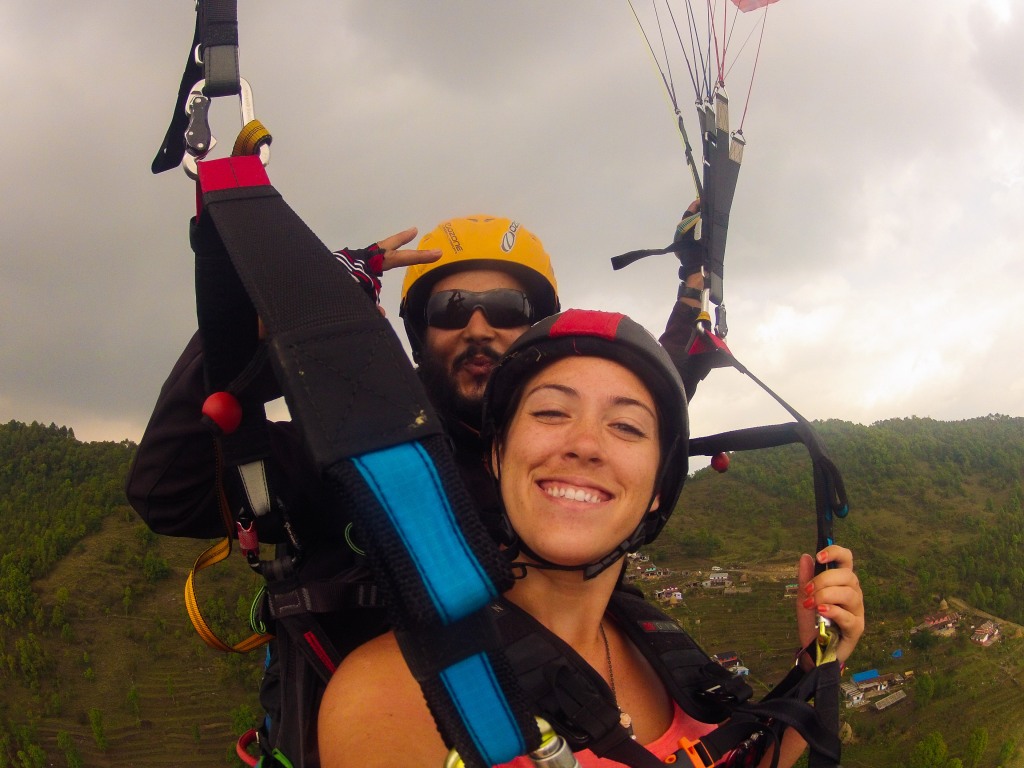 There are many activities to do in Pokhara.  You can go bungee jumping, zip lining and trekking are amongst a few of the options.  We originally were going to look into parahawking which is paragliding but with birds of prey that you get to feed up in the sky.  It’s the only place in the world that you can do it.  However, they wanted 130 pounds per person which is a bit out of our budget (though I wish we could have put it in our budget).  We paid $80usd (8000 rupees) per person to go paragliding.

Today happens to be our 4 year anniversary.  Might as well do something awesome. 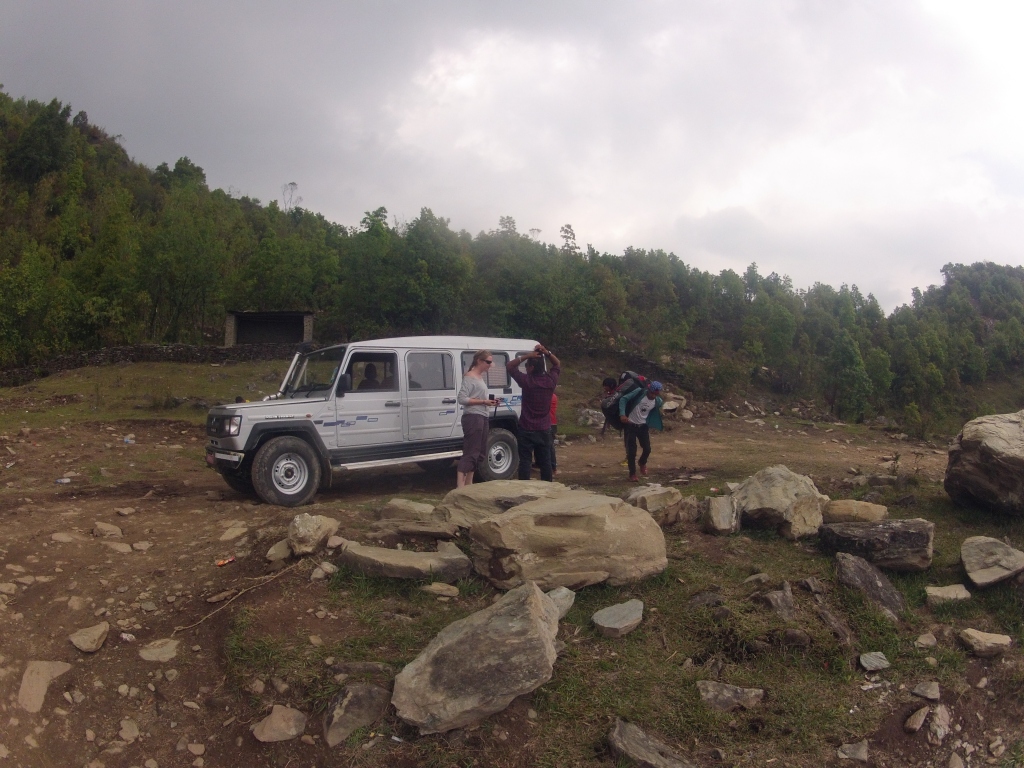 Our jeep picked us up from the office around 1:45pm and we headed up the narrow, bumpy mountain road.  When we arrived, there were some kids sitting in a field.  The pilots yelled to them and a few came over to carry some gear about 5-10 minutes to our take off spot.  I asked how much they pay the kids: 100 rupees per bag.

We checked the weather… it was overcast and not all that warm here.  The pilots gave us the option to go now but risk our flights being shorter because of the lack of visible thermals in the sky or head back and try again tomorrow but risk rain.  We opted to go now.

Kristi was set up quickly and the first in the air. 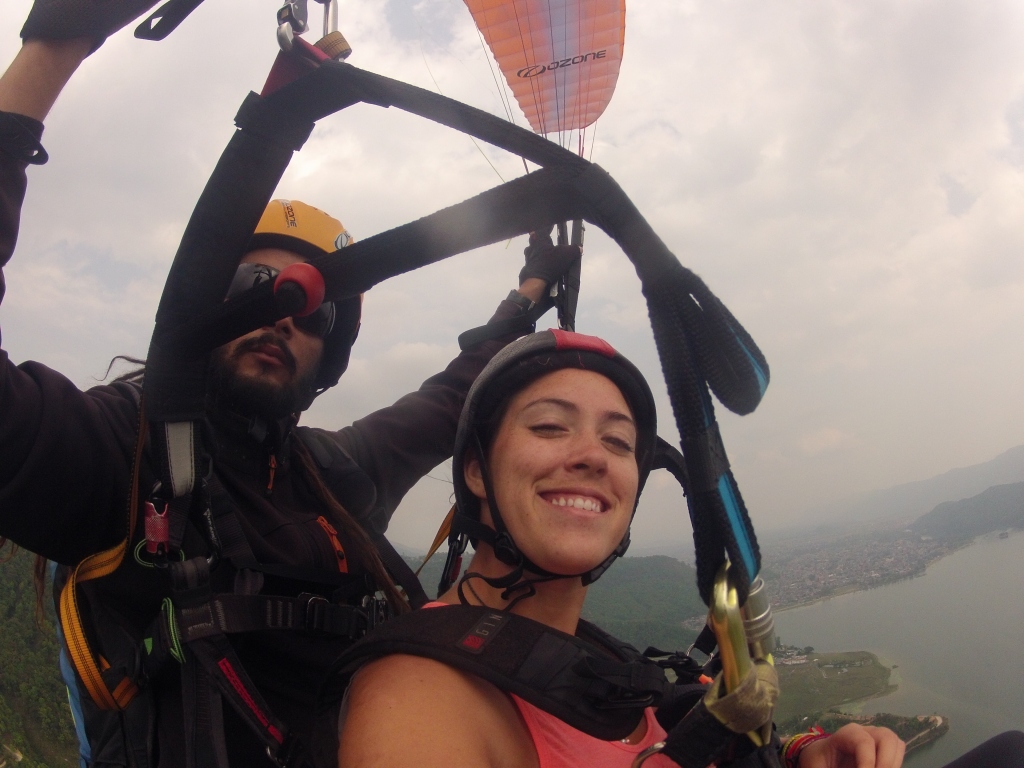 A couple minutes later, Brendan was up followed by Jacqui.

When Jacqui went up, I dunno if I had a look of terror in my face or what but one of the guys looks at me with a sinister smile and says, “you are next!”

As we get a gust of wind, my pilot says, “Walk, walk, walk…. RUN! RUNRUNRUNRUN” and before I knew it my feet were off the ground running on nothing.

What a rush! The first few moments in the sky made me feel more alive than I’ve ever been! It was amazing.

We flew over a village past a popular lookout point.  As we came over the hill we hit a thermal picking us up higher so we could sail longer over Fewa Lake.

My pilot told me to take the handles and let me fly for a bit.  “I am your passenger now” he says.  I take my role as guide very seriously, “If you take a look down, you will see a village.  If you look forward you will see the famous Fewa Lake where you can pay inflated prices to rent a boat that may sink. To the left you can see the popular center of Pokhara where tourists come to overpay for poorly designed products made in China and passed off as handmade.”  Luckily my pilot had a good sense of humor.

As we near the landing area, he asks me if I’m ready to do some acrobatics.  Well, if I’m gonna die, I might as well make it look cool.  Lets do it!
He says, “You will scream!”  Not hearing him right, I ask, “You want me to scream?” and as if he expected me to ask that he says, “I don’t want you to but it’s involuntary”

We started by pulling up and dropping… it gave a free falling feeling and my stomach felt like it was trying to come out of my mouth.  Then we did some swaying side to side in order to get a feel for the G-force. Now it was finally time.  Spinning in circles we spiraled towards the ground. I felt like a dog sticking his head out of the window.

As we came in for the landing, he told me what to do but I didn’t listen very well as I landed on my ass.

I honestly could not have been happier with the run.  Our pilots were awesome and entertaining.  I really couldn’t ask for a better way to spend our anniversary!