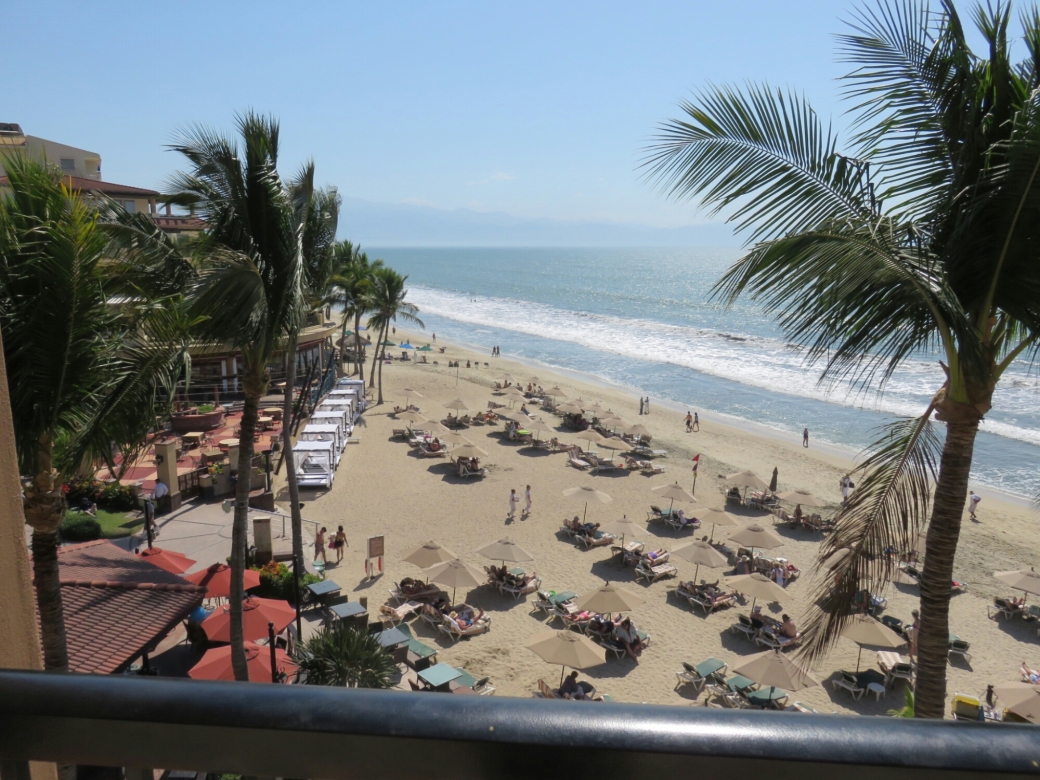 I would really like to do a zip line tour (canopy tour).  The most expensive yet best bang for your buck tour appears to be with Vallarta Adventures and it’s either the Outdoor Adventure tour or the Extreme Adventure tour.  They are also the only zipline company that offers a double line.  I understand that the single track ziplines are perfectly safe, but the double line is just for peace of mind.

Now here’s the difficult part.  They want $109USD per person.  I don’t want to pay that.  Kelly brought us to her friend Pablo to see if he can get us a better deal.  He came down a little bit on the price to $92USD each.  This isn’t promising.  He has said he can give us 2 for 1 at $92USD if we’re willing to help him out and go to a time share presentation.  We decided we would think about it and call him back.

We made the decision that we would do it.  I’ve never been to a presentation like this before. I can just go and enjoy a free meal and then tell them I’m not interested.

We met up with Pablo 2 days later to go over the details.  Now begins one of the sketchiest conversations ever.

I attempted to type out the conversation but it’s long and drawn out so I will do my best to explain how it went.  Pablo is really shitty at explaining things and very indecisive on how things should be.  I found out later it’s because he will not get paid if the details fall apart. He knows that we don’t want to buy but we have to appear as though we do.  He didn’t explain this to us, he just started talking fast about things that screamed out “YOU’RE GETTING F%$#ING SCAMMED.”

He started out telling us we need to bring ID and a credit card.  Our ID needs to be same address and we both need a credit card.  We have to convince them we are married.  He asked us how old we are and it was very important that I am 30.  He said we have to tell them we work 40 hours a week… This made me laugh.  Maybe combined we work 50 hours a week.  It’s important that we both say we work 40 hours a week.  Doesn’t matter that I make $9.60 an hour as long as I work lots of hours.  Does this mean that Tim Ferris, the author of The 4-Hour Workweek doesn’t qualify for a time share?

Now he’s asking us where we are staying.  We can’t say that we’re in a local neighborhood staying with a friend so we may have to lie and say we are in a hotel.  He’s not sure yet.  For now he writes down “private condo” and our room number is 12.  “Tell them you’re paying $150 per night”… we don’t even have hot water! As he tried to figure out where our actual apartment was, he told us on the morning of to get a taxi to Walmart and he would meet us there.  We don’t have to pay for the taxi because the time share will.  “Just tell him you’re going to Flamingos but we’ll meet at Walmart.  Actually, don’t tell the taxi driver nothing.” Buttttt… How will he know I’m not paying for the taxi?

If Pablo wasn’t a friend of Kelly’s I would have told him where to go in some not so pleasant 4 letter words and walked away.  But, we stuck it out and figured it would be a good story if nothing else. We’re all set for Friday.  We tried to talk us into 7am but we got him back to meet at 9am.  We also had to put down a deposit towards the tickets.  We owed 1932 pesos so we offered 500 pesos for a down payment. We would pay the remainder of the balance at the end of the presentation and get our tickets.  We would also have the use of the pool with a VIP Card for the remainder of our stay here in Mexico along with 20% off at the Spa and Restaurant.

On Tuesday morning we decided Friday was too far away to do this and it would be nice to get it over with sooner.   Kelly called Pablo at 10:30am and Pablo basically said we could go now but we have to make a decision quickly since the cut off is noon.  Quickly, we decided to go.  We started walking down Lazaro Cardeñas towards the bar and Pablo met us with a taxi part way.  By now it’s like 11:30am.

45 minutes later at the nothern tip of Nuevo Vallarta we arrive at Villas Del Palmar part of the Flamingos buildings.  Everyone was giving Pablo shit for us being so late. I assumed it was because it’s a group presentation.  It wasn’t. It was myself, Kristi, Tony our guide and Juan Carlos, his trainee who doesn’t speak english.

We breezed through a few questions and gave the some bullshit answers about renting a condo on Air BnB and being married and working lots of hours.  We had to show that we had a credit card though they just wanted to see what kind we had.  No questions about limits or looking at the numbers.  They didn’t even look at the name on the card.

Tony tells us that he is here to give us a sales presentation and at the end we have to give him an answer; Yes or No. If no, we can still be friends. If yes, we can be family.  It was an awkward beginning.  We walk up and they have us sit and they take 20 seconds to fill out some paperwork.  Then we sit and answer questions for 2 minutes. Then we sit and talk to Toni for 2-3 minutes. As we walk outside to the restaurant, there’s aquasize happening in the pool.  They never said this place had whale watching!  Tony laughs because I’m hilarious and we enter the restaurant for lunch.  3 options for lunch.  A chicken dish, a beef dish and a seafood pasta.  Kristi has the chicken and I have the pasta.

The food looks beautiful when it comes out.  The meal was actually very average though.  Conversation flows nicely as we discuss traveling and where we would like to go and what we want do.  Unfortunately, Tony misses the mark on us and assumes we want to go on more tours.  You can take a tour here or take a tour there. Appreciate the suggestions but… pass.

After lunch we go for a stroll around the pool and to the elevator to see the rooms.  All rooms are equipped with a kitchenette and are actually really nice.  A studio, 1br or 2br option with the 2br being massive.  Walk in closets, nice bathrooms with jacuzzi soaker tubs and beautiful walk in showers.  Then to top things off, a hot tub on the patio overlooking the ocean.

We head back to the office which Tony calls “The happiest place on earth” and compares it to Disney Land.  I see a bunch of sales people pitching things that I don’t need.  They offer us beer or Mimosas.  I ask for a Pacifico… they only have Corona. They are off to a bad start. We both have a mimosa, it’s a shitty mimosa. Why would you bring bartenders a poorly mixed drink? He explains the program and all of the partners that we can stay with.  The yearly maintenance fee and how you spend money to buy points.  It all sounds great and for what you get, it would cost ridiculous amounts to stay in places like this.  So do you want to buy today? Nope! Why not? Because I don’t make big monetary decisions after a 75 minute presentation. I make smart calculated decisions.

So after Tony fails to sell us, he brings in the next guy.  This guy is the funniest guy in Mexico and everybody loves him.  I don’t remember his name but he didn’t tell a single joke.  After he failed, they had another guy come in to speak to us.  All of a sudden the cost went from $28,000USD to $20,000USD to $14,000USD. But only if we buy today. Like I couldn’t come back in a month and demand what I want.

Once we said No to this, they sent us on our way and passed us off to an awkward Canadian guy who lives and works there now.  He asks questions about how we were treated after we said no and was our tour professional, etc.  He then sends us to the next room where another guy stops us to see what we plan on doing.  He then says he can get us the Outdoor Adventure Tour for free along with a massage and a bottle of tequila if we do another presentation.  Nope.  He’s very keen to sell us more tours.

Finally, we get to guest services.  The girl is reserving the tour for us on Thursday but another guy wants something so now she’s trying to help both of us at once. OMG Just give us our tickets! After about 10 minutes, we have our tickets in hand along with a taxi voucher to go home and a vip card.  We hit up the pool around 3pm.  Relax for a little over an hour and enjoyed the hot tub before some ugly clouds rolled over us.

Overall, it was relatively harmless and not a huge comittment to our time when it meant saving 60% something I really wanted to do.  I  think I found a new way to get things I want.